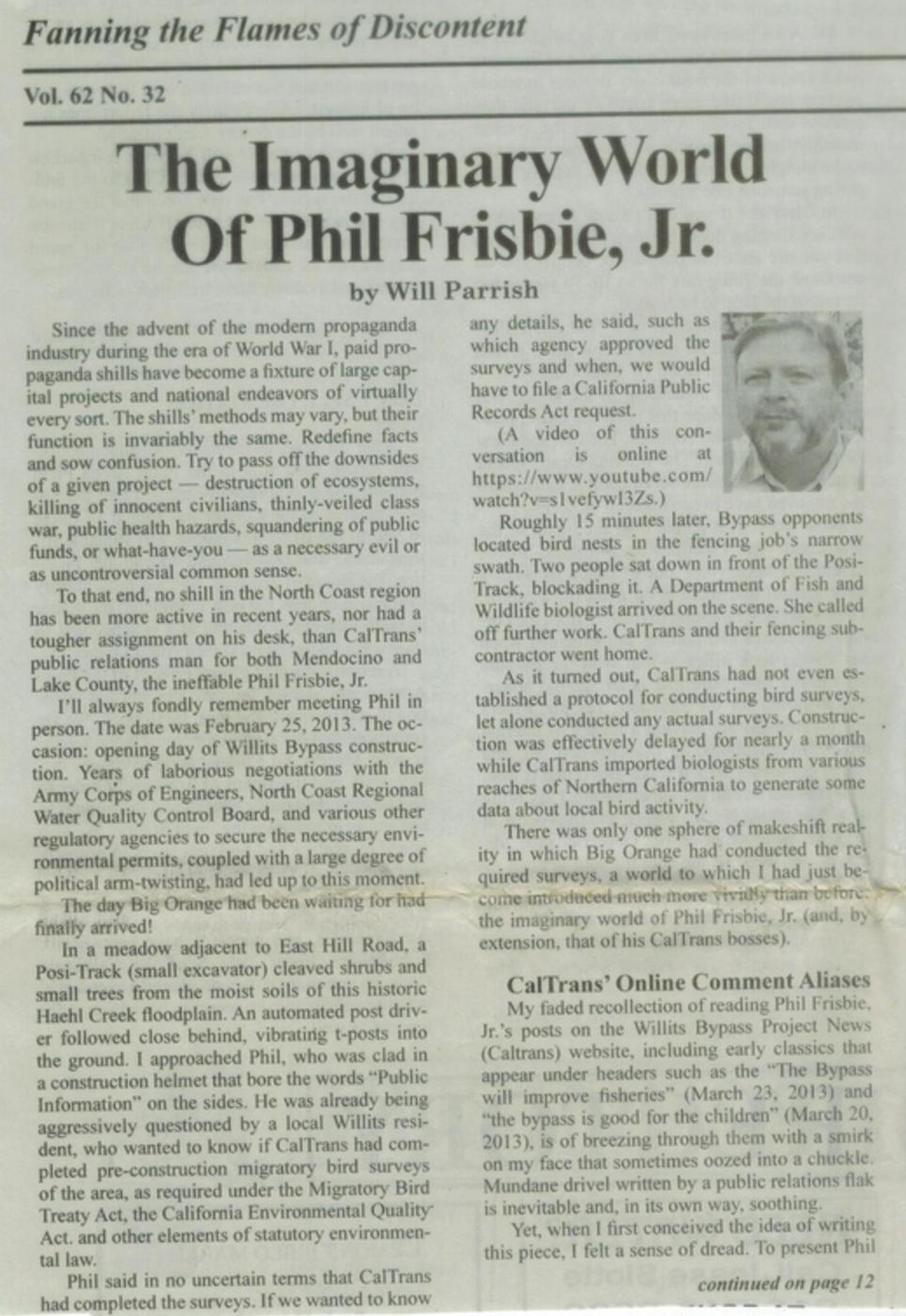 The process surrounding the construction of the Willits Bypass demonstrates a collection of symptoms that indicate a malevolent force within our State government leadership. What are the elements of the process?

The first element of the wrongness of the bypass is the clear fact that the bypass is unnecessary. Those who planned the bypass have disregarded the obvious fact that the level of traffic flow does not warrant a bypass. The bypass is not necessary because a large percentage of the vehicles going in and out of Willits on Hwy 101 North or South will bypass the bypass because they are going to and from Hwy 20 and Brooktrails.  Michael Fitzgerral, Tribal Chairman of the Sherwood Valley Rancheria, told me that according to his studies, only 30 percent of traffic would be diverted by a bypass.

The real issue is not the necessity of bypassing Willits, but instead, the real issue is that of reducing the congestion of traffic that must come in and out of Willits for various reasons -- including just passing through and perhaps stopping to shop. The real solution would have been to have built three lanes running north on the route of the railroad corridor which passes through town just 3 blocks east of present Hwy 101, and to have built three lanes running south on present 101. The city of Eureka has three lanes which run east as 5th Street and three lanes which run west as 4th Street. Willits would have then continued to enjoy the financial benefits of the flow of traffic, just like that which Eureka enjoys and will enjoy forever on the very same Highway 101.

Caltrans says that various regulations and laws prevented the use of the railroad corridor. The railway is “considered an active railway.” Railroad employees tell me that it has not been used for twelve years. It is obviously not an active railway, but being presented as such, made the use of the corridor supposedly untenable in Caltrans' eyes. If ever there were a case for exercising the concept of eminent domain then this is it. Besides, haven't the railroads already received far more than their due of government compensation and leeway? The cost of this plan would be microscopic compared to the cost of the bypass.

So, the first element of the process is the disregard of logic. No real consideration of the railroad corridor was ever made . Of course, there would have been some kind of a legal battle no matter which route were proposed.

As the first element of the wrongness of the bypass is the disregard of the clear fact that the bypass is unnecessary for reducing congestion, the second element of the wrongness of the bypass is the fact that it involves the shocking destruction of precious wetlands, precious animal habitats and scores of mature trees.  Much of this destruction involves the repeated breaching of the wetlands substrate by the planting of mammoth stanchions which support the long causeway segment of the bypass. Thank you for this, your assessment, Will Parrish: “this horrible, unnecessary, wasteful, environmentally destructive boondoggle.” Dictionary.com, Boondoggle: noun. a project funded by the federal government out of political favoritism that is of no real value to the community or the nation.

If you are going to build an unnecessary freeway that will destroy wetlands, and do this with the alleged idea of replacing the wetlands, you could make a hint at honor by creating the new wetlands first, then build the unnecessary freeway and destroy the original wetlands after you have shown yourself to be a trustworthy and competent wetlands re-builder. That way the birds and other animals won't be left in the lurch during the years in between, while you eventually get around to being able to keep your word. Jared Huffman seems to have helped to facilitate this debacle through his communications with the Army Corps of Engineers. He seems to have played a part in convincing the Corps of Engineers to allow Caltrans to continue to build the unnecessary freeway with the idea that Caltrans will get around to creating new wetlands some time in the future.  "CalTrans will then begin "'wetland establishment work this year'" of about three to five acres, unless it discovers unforeseen archaeological sites."-- Mendocino Beacon, July 10, 2014.​  Jared Huffman presents himself as an "environmental leader."

The third element of the wrongness of the bypass is the fact that there are various Pomo archaeological sites within the area designated for the supposed new wetlands. I met with Lee Clauss, the highly respected archaeologist who has examined Little Lake Valley at the behest of the Sherwood Valley Pomo. She made it very clear to me that there are significant Pomo archaeological sites along the entire circumference of Little Lake Valley. It is now clear that Caltrans can do no good. Of course, Caltrans' leaders know it was wrong to build the unnecessary freeway. So, of course, they would not honorably seek out the possibility of the presence of archaeological sites where they dishonorably destroy irreplaceable wetlands.

Fourthly, even though Caltrans is building a two lane bypass, they have made it clear that they plan to build an exiting roundabout to accommodate a future four lane bypass. The idea of eventually needing to make the bypass a four lane freeway is an absurdity because everyone knows that Hwy 101 will always be a two lane highway along the five miles just north of town. The largeness of this roundabout will also destroy an archaeological site. Priscilla Hunter of the Coyote Band of the Pomo told me that Caltrans has to acknowledge archeological sites, but “acknowledgment” is about all that they must legally do. Without an injunction they can legally go ahead and build their giant roundabout right over the archaeological site. Boondoggle? Yes.

When I met with Michael Fitzgerral, he made it clear to me that he wished that Caltrans would have shown justification for their plans. And, he felt that they should have executed good faith in regard to their responsibilities to take into proper consideration all of the complex elements involved in fish migration, stream degradation, bird migration and traffic flow to Brooktrails and Highway 20. He also feels that they should have given careful regard to the possibility of the presence of archaeological sites.

The problems are deep. Once a bureaucracy gets going with an idea, the inertia never stops.. They never stop trying because, as a government bureaucracy they must survive by ever expanding. Of course, the real issues are money and power. As they expand,there is more money. Those who facilitate the expanding, do then augment their power.

We must not acquiesce. As a free people, we have the right to expect complete openness and honesty from the spenders of our tax dollars.

Since there is no real logical call for a bypass, the fact that it is being done anyway, at the expense of our area's precious wetlands and native Pomo archaeological sites, calls for the question, “what are the real forces behind the bypass?”

“What rarely gets mentioned is that the Willits bypass is part an ongoing series of Caltrans projects designed to open up the California North Coast to large trucks, thereby creating a through loop to foment the development of Humboldt and Del Norte counties (where these trucks are currently banned). The best we can hope for is an informed citizenry willing to stand in the way of bulldozers poised to do irreversible damage to a pristine valley once the deal-makers have provided the project with legal cover.”--GREG KING President, Siskiyou Land Conservancy.

"This is also what the ‘Smart train’ coming now up to Cloverdale and eventually further North is also about. The rails are being laid to accommodate commercial traffic. It is part of a grand UN Agenda 21 overall ‘Smart Growth’ agenda being directed internationally into every region to control all resources and people." --James Lee, Anderson Valley

A critical read is Rosa Kloire’s excellent expose of what is going on right here in the North Bay and beyond titled, “Behind the Green Mask, UN Agenda 21″ --James Lee, Anderson Valley

​Below is information obtained from, Smart Voter--League of Women Voters.  (Red Text Color augmentation and underlining is by Dale K. Mensing.)

​Candidate for Member of the State Assembly; District 6
This information is provided by the candidate

Read about Jared Huffman's agenda for protecting California's environment, and see why he's won every environmental group endorsement in the race, including Seirra Club......

.....3. Fighting the Republican Assault on our Environment

Our most important environmental laws are under blistering attack from President Bush and his allies. Cowboy Congressman Richard Pombo is leading an effort to gut the Endangered Species Act by giving developers and commercial interests priority over endangered wildlife.  The Supreme Court is poised to re-interpret the Clean Water Act to remove protections for millions of acres of wetlands and countless tributary streams. And using the pretext of our ​infrastructure needs, Republicans in Sacramento are seeking broad new exemptions from environmental laws. California's environmental laws are our last line of defense and must be strengthened, not weakened. That includes bolstering California's Endangered Species Act to replace lost federal protections; promoting better planning before species are pushed to the brink; and ensuring the Porter-Cologne Act--which protected us before passage of the federal Clean Water Act in 1972--​is broadly applied to all California wetlands and streams.   Marin and Sonoma residents understand that these laws protect our natural heritage, our quality of life, and our children's health. 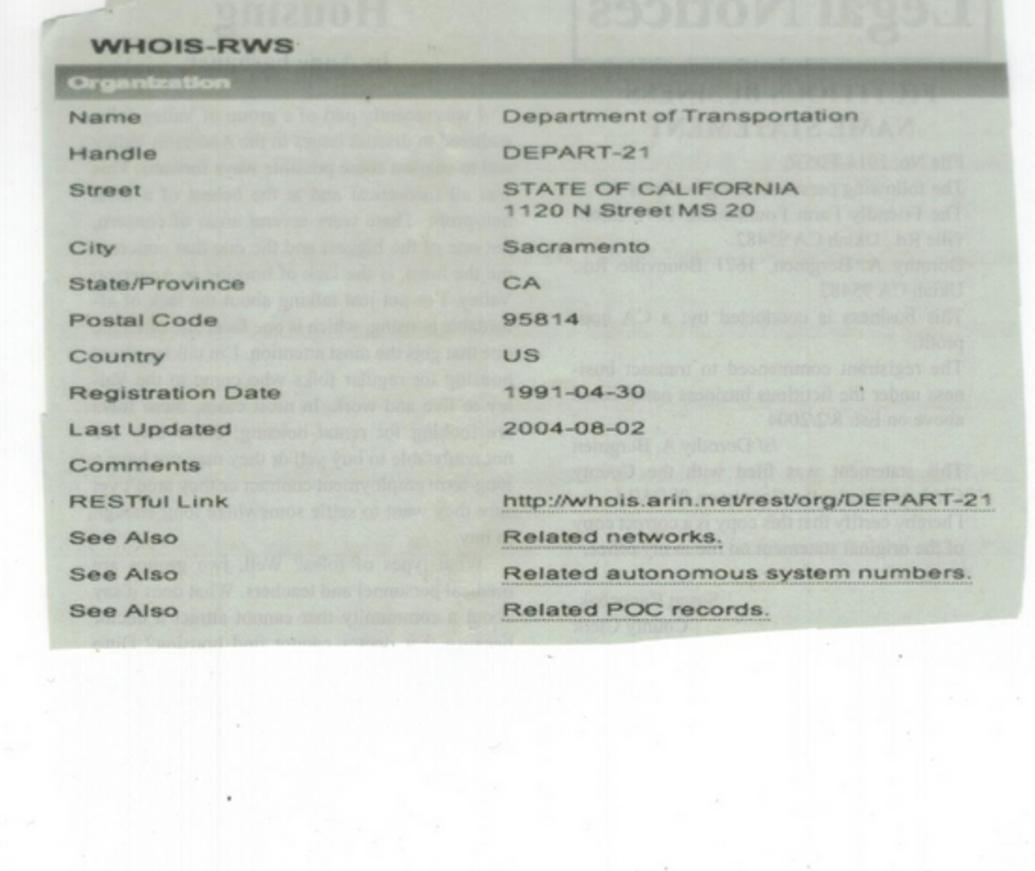 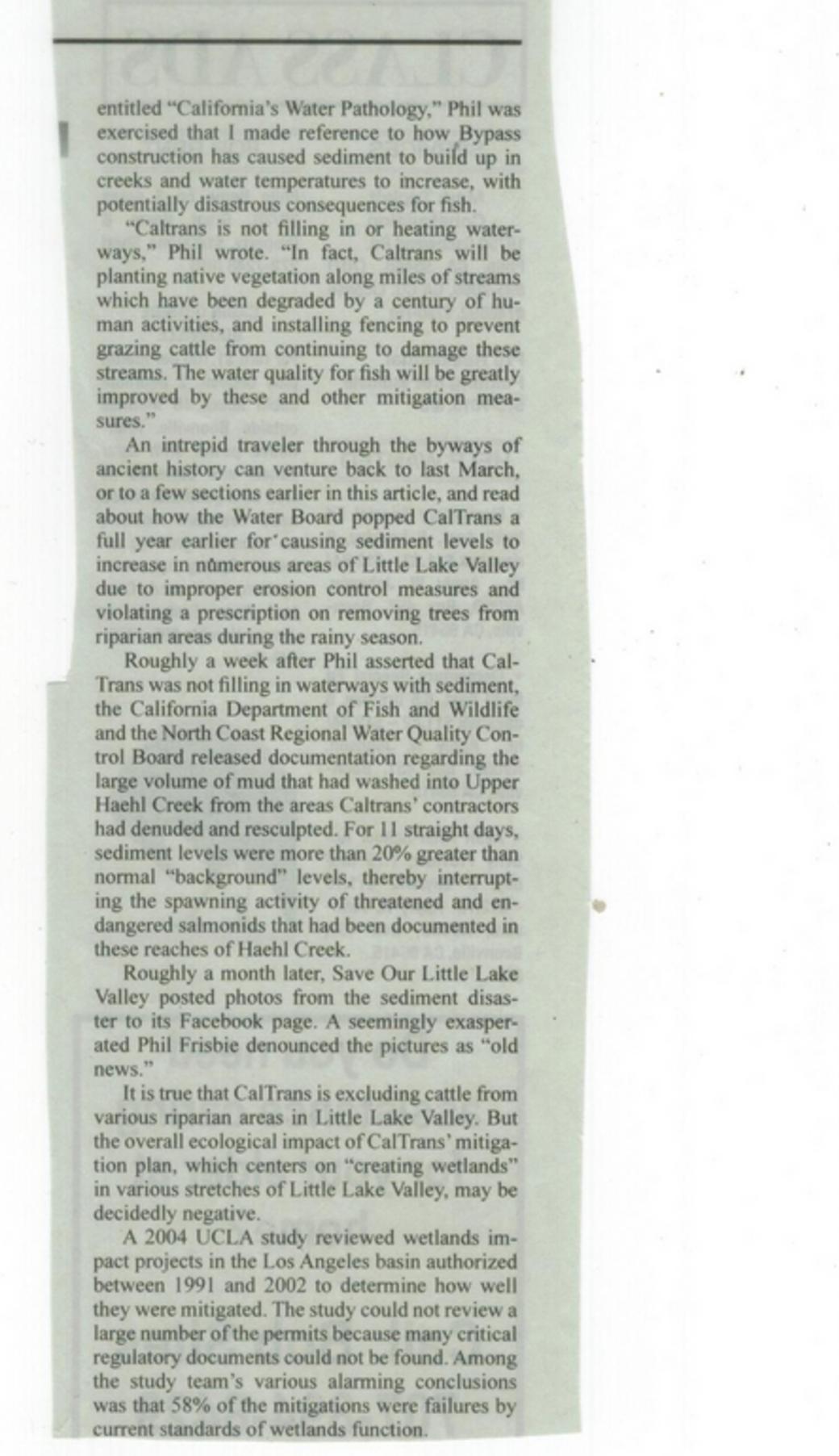 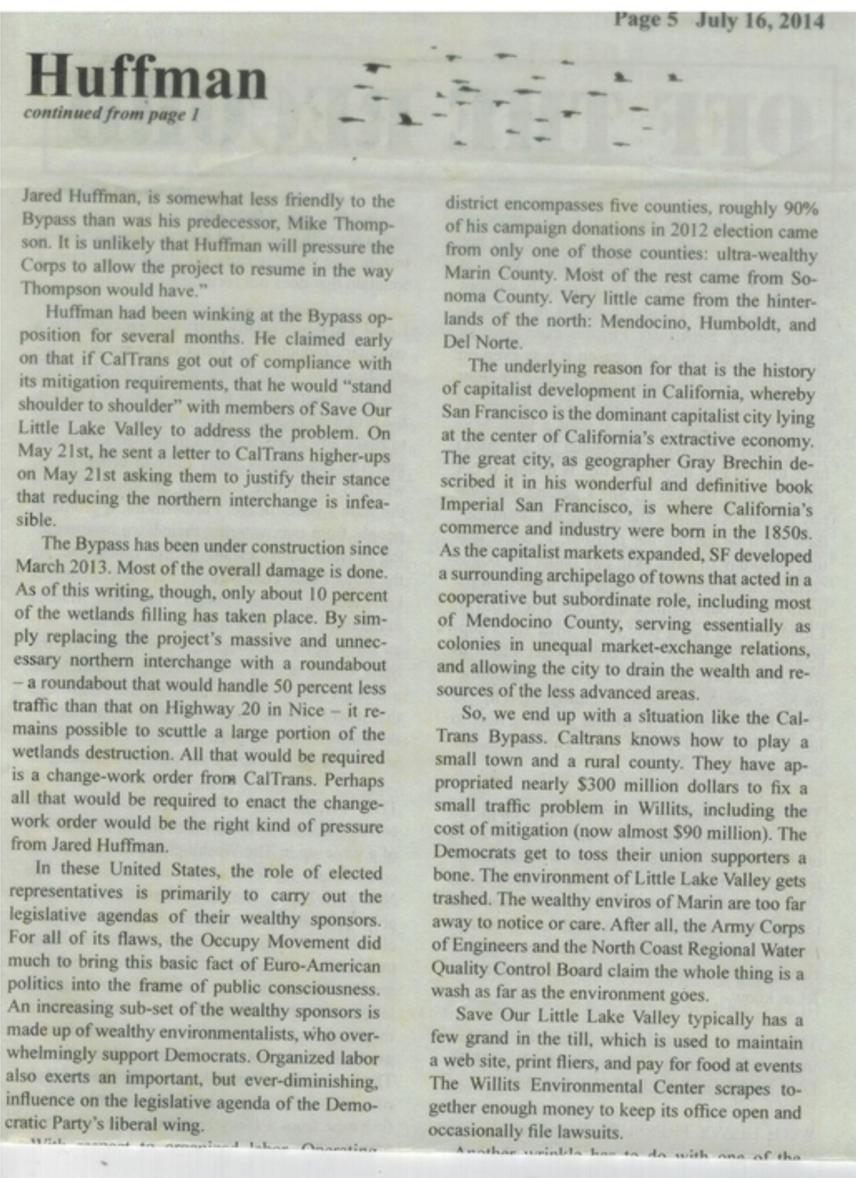 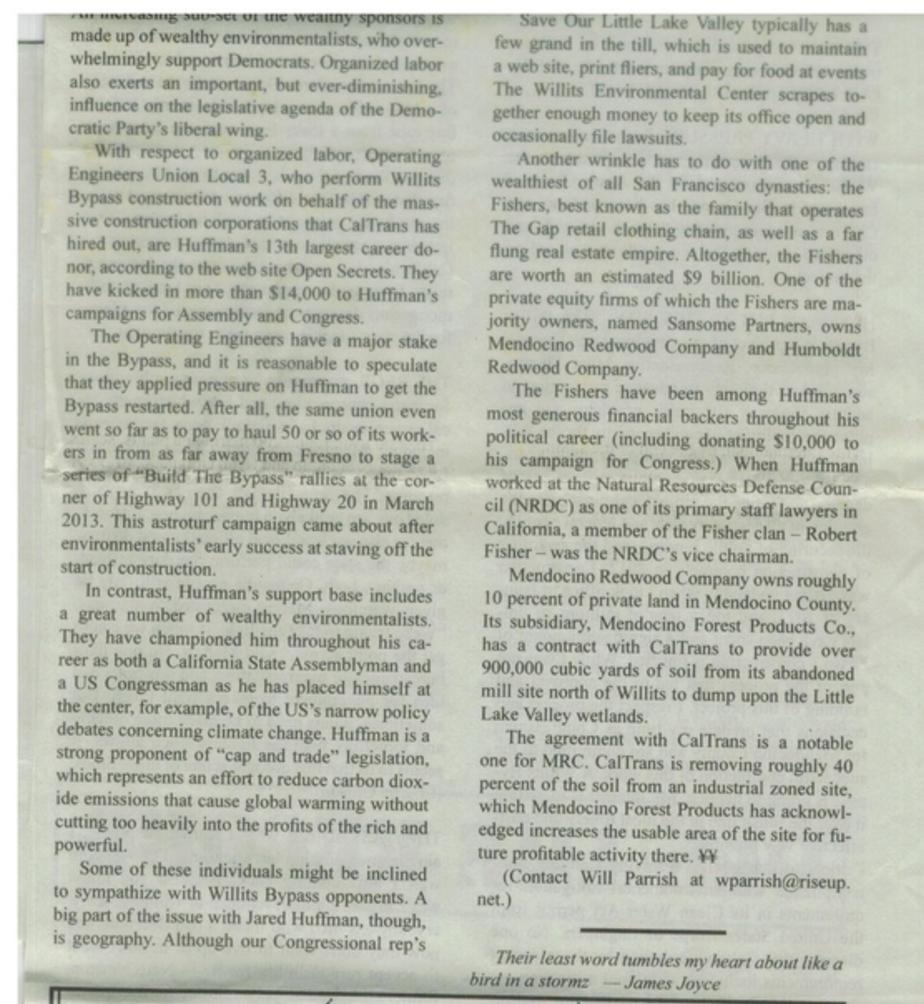 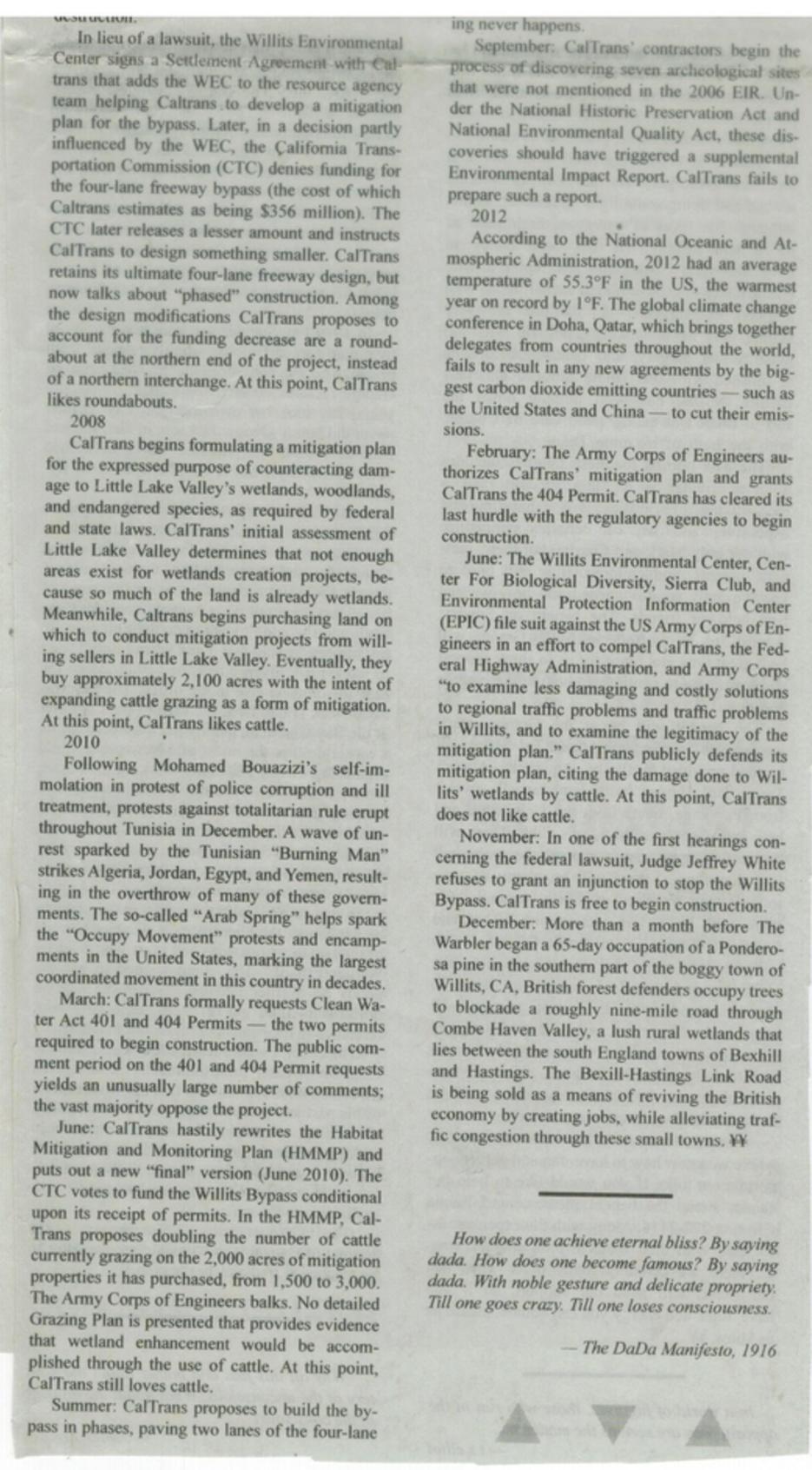 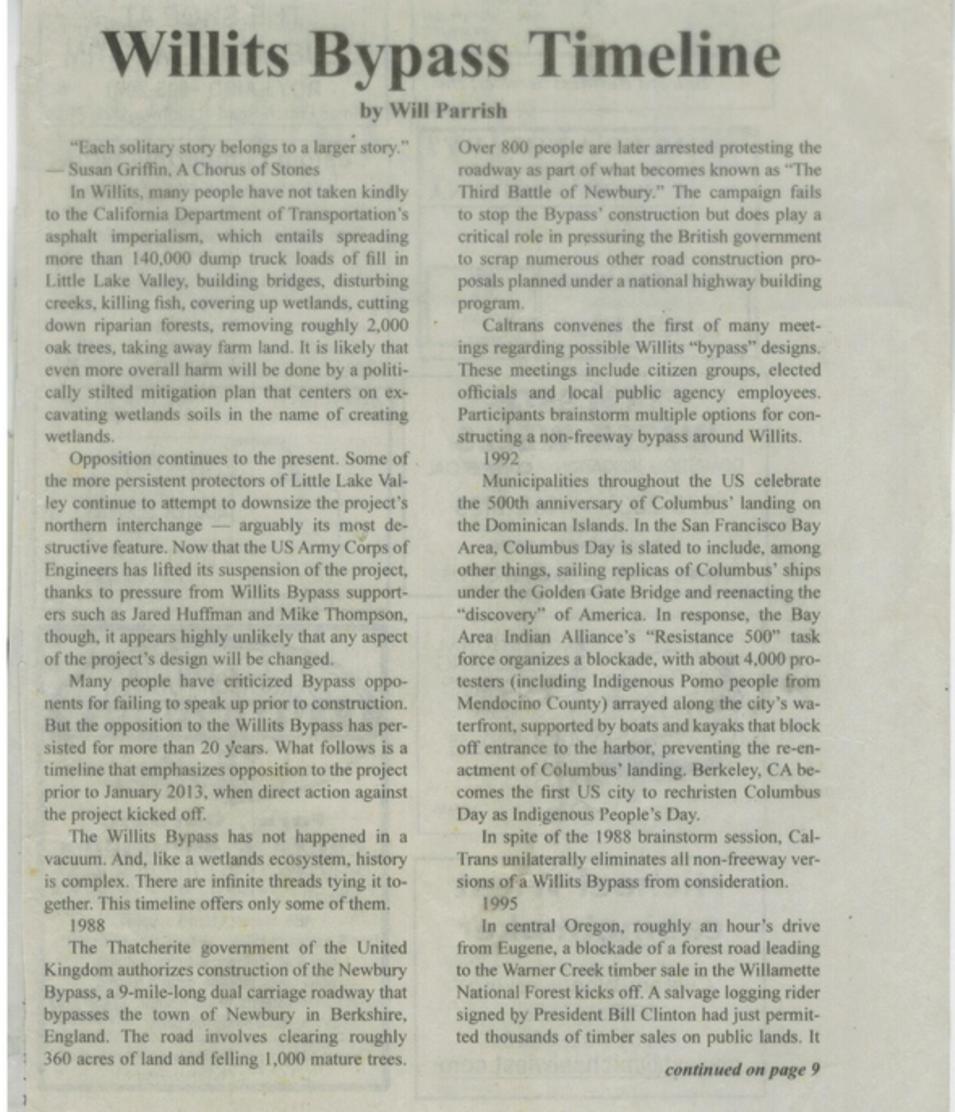 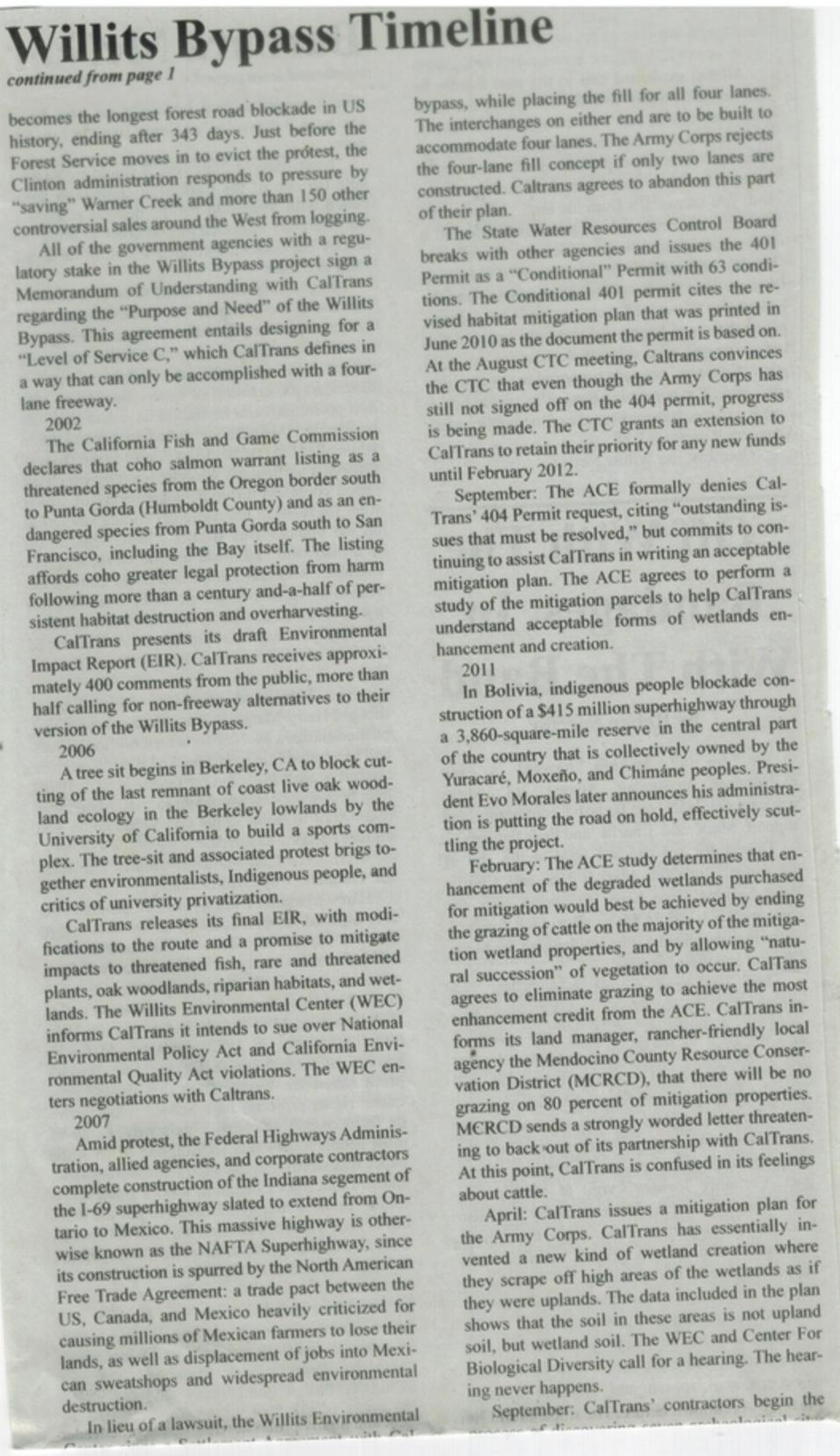 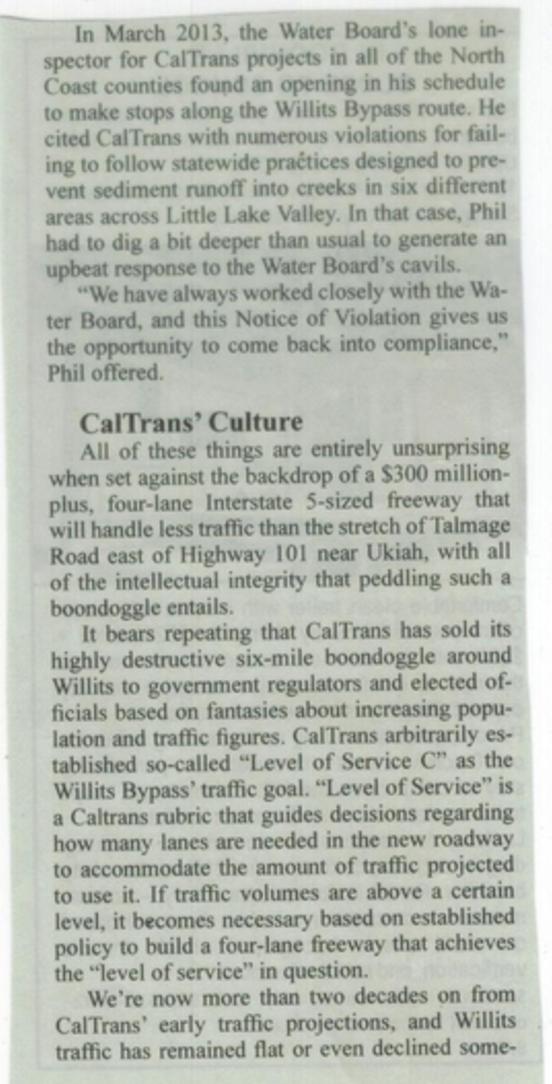 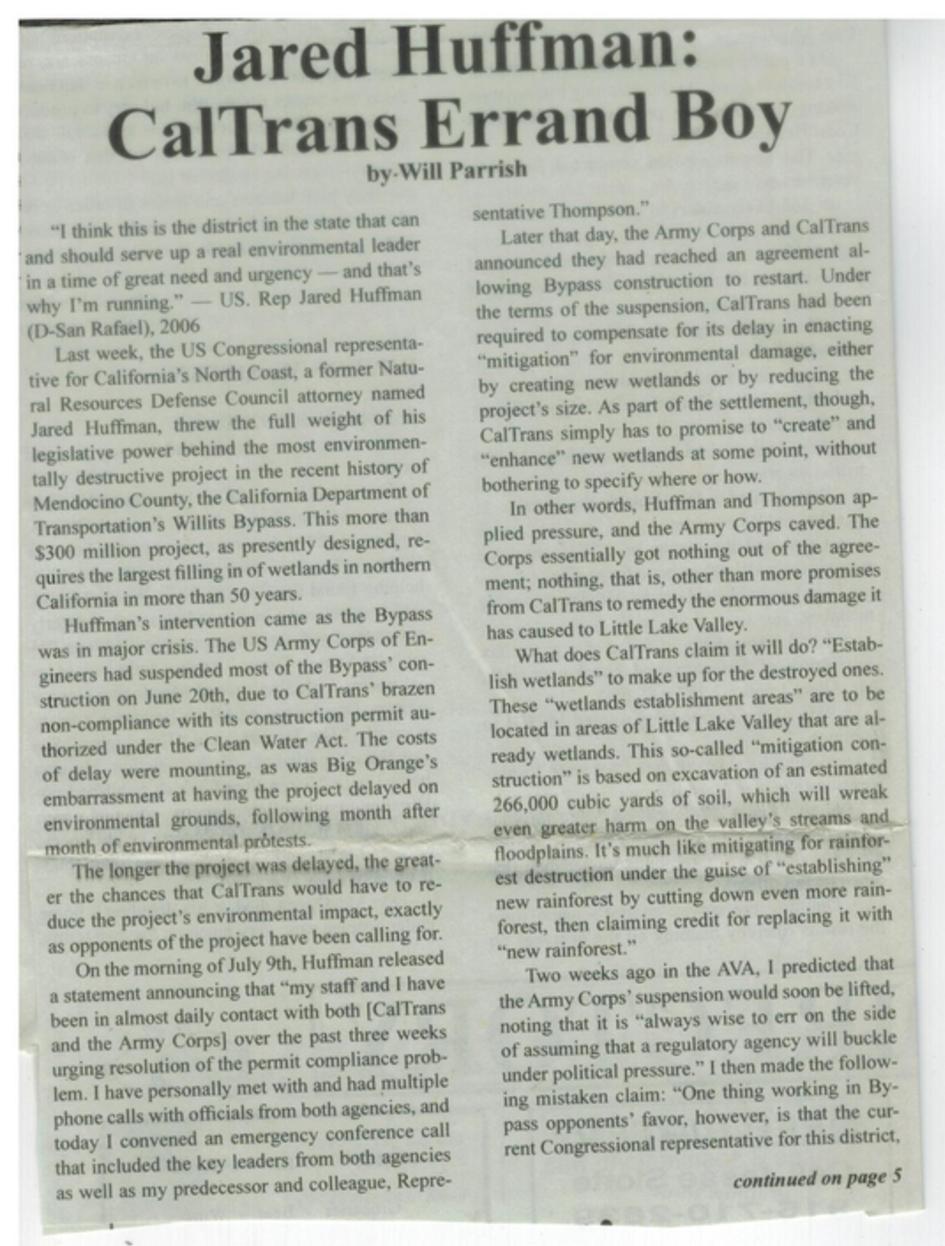 ​I respectfully suggest that the reader consider the implications of the contrast between Jared Huffman's part in destroying wetlands to facilitate infrastructure needs in 2014, and his statement rebuking the removing of wetlands protection, "using the pretext of our infrastructure needs" in 2006.          --Dale K. Mensing

“Give me the liberty to know, to utter, and to argue freely according to conscience, above all liberties.”― John Milton, Areopagitica